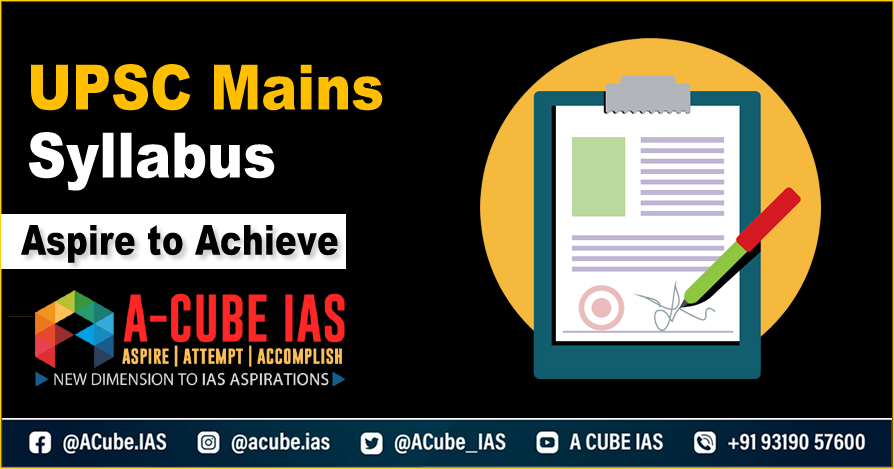 Syllabus for the Mains Examination

The Mains Examination is intended to assess the overall intellectual traits and depth of understanding of candidates rather than merely the range of their information and memory. The nature and standard of questions in the General Studies papers (Paper II to Paper V) will be such that a well-educated person will be able to answer them without any specialized study.

The questions will be designed to test a candidate’s general awareness of a variety of subjects, which will have relevance for a career in Civil Services. The questions are likely to test the candidate’s basic understanding of all relevant issues, and ability to analyze, and take a view on conflicting socio-economic goals, objectives and demands.

The candidates must give relevant, meaningful, and succinct answers. The scope of the syllabus for optional subject papers (Paper VI and Paper VII) for the examination is broadly of the honors degree level i.e. a level higher than the bachelors’ degree and lower than the masters’ degree.

In the case of Engineering, Medical Science and law, the level corresponds to the bachelors’ degree. Syllabus of the papers included in the scheme of Civil Services (Main) Examination are given as follows :

The aim of the paper is to test the candidate’s ability to read and understand serious discursive prose, and to express ideas clearly and correctly, in English and Indian language concerned.

The pattern of questions would be broadly as follows:

Note 1: The papers on Indian Languages and English will be of Matriculation or equivalent standard and will be of qualifying nature only. The marks obtained in these papers will not be counted for ranking.

Note 2:The candidates will have to answer the English and Indian Languages papers in English and the respective Indian language (except where translation is involved).

Candidates may be required to write essays on multiple topics. They will be expected to keep closely to the subject of the essay to arrange their ideas in orderly fashion, and to write concisely. Credit will be given for effective and exact expression.

This paper will include questions to test the candidates’ attitude and approach to issues relating to integrity, probity in public life and his problem-solving approach to various issues and conflicts faced by him in dealing with society. Questions may utilize the case study approach to determine these aspects.
The following broad areas will be covered: