Submit your answer and get it checked by our mentors  Model Answers will be uploaded by the end of the day
Write or upload your answer - SUBMIT HERE
17 Dec 2021 gs-mains-paper-1 ART & CULTURE
#GS Mains Paper 1
#Art & Culture
Question : Bring out the main features of the Vesara style of temples 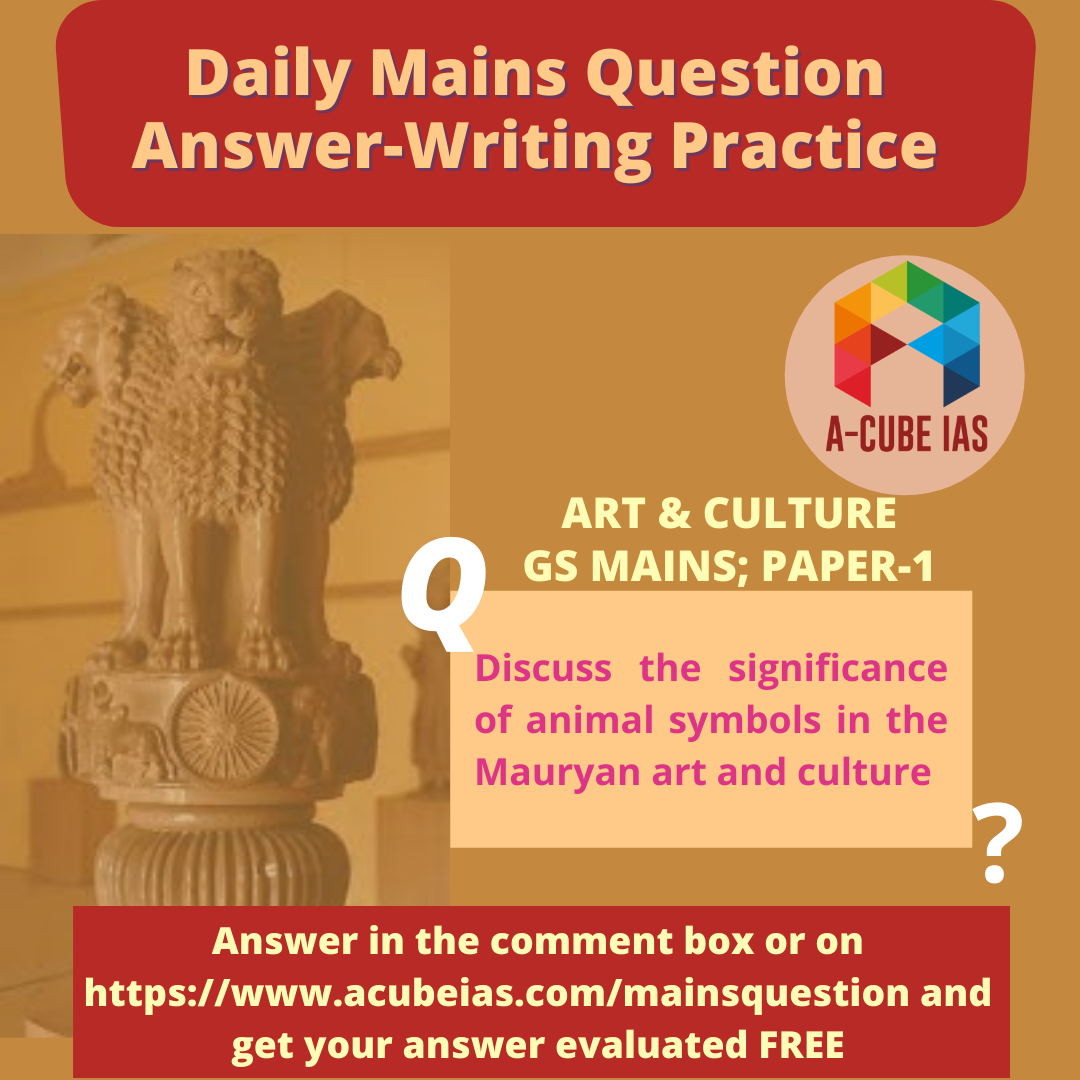 Write or upload your answer - SUBMIT HERE
27 Sep 2021 gs-mains-paper-1 ART & CULTURE
Question : Explain the relevance of Four Noble Truths, which contain the essence of the Buddha’s teachings in the modem time.

(GS MAINS PAPER 1)
Write or upload your answer - SUBMIT HERE
21 Sep 2021 gs-mains-paper-1 ART & CULTURE
Question : Ramanuja was an intense admirer of Adi Sankaracharya. Both the Acharyas laid down that there truly existed only one universal being called Brahman or Paramatman, the Highest Self yet the philosophy of Ramanuja differs from that of Sankaracharya. Comment. 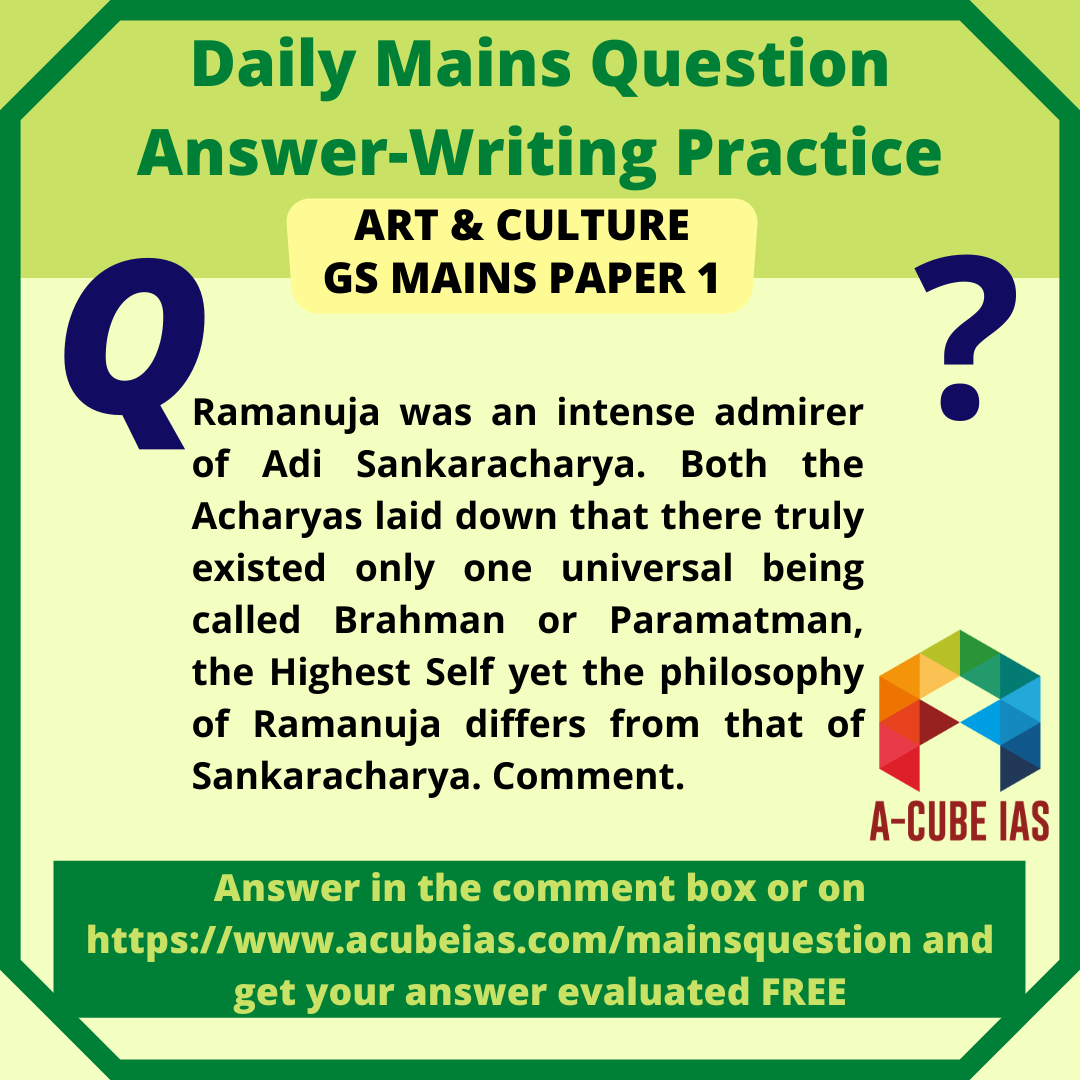 Write or upload your answer - SUBMIT HERE A-CUBE IAS Answer :
Adi Guru Shankaracharya and Ramanujan were prominent proponents of Vedanta philosophy during the early period of the Bhakti Movement in India. Despite the fact that both of them believe in non-dualism and both systems state that all souls can hope to achieve the blissful state of the Brahman. However, Ramanujan and Shankaracharya differ on following areas
Nevertheless, the contribution that they made inspired others to follow the idea of the oneness of God. Apart from that their work helped in the revival of Vedanta philosophy during the early medieval period. Moreover, Ramanujan went a step ahead for the promotion of the Bhakti method from southern India to Northern India.

02 Sep 2021 gs-mains-paper-1 ART & CULTURE
Question : Describe the Social Revolution brought in by the Bhakti Movement during medieval period in India.

(GS MAIN PAPER 1)
Write or upload your answer - SUBMIT HERE A-CUBE IAS Answer :
Before we discus about the Social Revolutions brought in by the Bhakti Movement, it will be pertinent to understand what social revolutions are.
Social Revolutions are typically conceived as transformative historical events that fundamentally change the social structures of society. Social revolutions are mass based. Generally, their outcomes, as such, are usually associated with the transition to modernity, the rise of capitalism, and the emergence of democracy.
The rigid caste system, the complicated ritualism that constituted the practice of worship and the inherent need to move to a more fulfilling method of worship and salvation perhaps spurred this movement. Bhakti poets emphasized surrender to god. Equally, many of the Bhakti saints were rebels who chose to defy the currents of their time through their writings. The Bhakti tradition continues in a modified version even in the present day.
The Bhakti Movement we known about had its genesis in southern India in the 7th and 12th century CE. The evolution of Bhakti movement in medieval India gained momentum in the northern part of the country during the 12th -17th century and it included socio- religious movements.  The ideas of Bhakti were carried by scholars as well as by saints. Among these mention must be made of Sankaracharya, Ramanuja, Madhavacharya, Vallabhacharya, Jnaneswara , Sant Eknath , Namadeva and Ramananda. Among the disciples of Ramananda mention must be made of Ravidas, Kabir, Sena, Sadhana. Some of the female Bhaktas were –Akkamahadevi, Janabai, , Bahinabai.  The seeds scattered by these saints fell on fertile soil. The Brahmanas had lost both in prestige and power following the defeat of Rajput rulers and the establishment of the Turkish Sultanate.
As a result, movements such as the Nath Panthi movement challenging the caste system and the superiority of Brahmanas, had gained popularity.
The Bhakti movement, as a social movement, challenged caste hierarchy, emphasized the individual's direct connection to god and the possibility of salvation for all through good deeds and simple living. As a literary movement, it liberated poetry from singing the praises of kings and introduced spiritual themes. From a style point of view, it introduced simple and accessible styles like vachanas (in Kannada) and other forms in various languages to literature and ended the hegemony of Sanskrit. Bhakti movement provided an impetus for the development of regional languages such as Hindi, Marathi, Kannada, Bengali etc. Since various Bhakti leader spoke and wrote in these languages, these regional languages developed.
Poets played an important role in laying the foundation for a reconfiguration of society on more equitable lines. Several strains of thinking emerged out of their efforts.
The position of women in the society and also the lower classes of people were raised to a position of greater importance because the Bhakti leader condemned the caste system and also the superiority enjoyed only by the male members of the society. As a result of the Bhakti movement unity was established among the two communities- the Hindus and the Muslims.
Kabir, who preached a monotheism appealed directly to the poor and assured them of their access to god without an intermediary. He rejected both Hinduism and Islam, as well as empty religious rituals, and denounced hypocrisy. Even in the times of slavery during medieval period, it was the Bhakti movement that kept the spirit of India alive.
It is also considered by many to have played a part in stopping conversions after Islamic conquests.