15 May 2022 gs-mains-paper-2 GOVERNANCE
#Social Justice
#GS Mains Paper 2
Question : Do you think that NGOs have delivered the desired goals in the field of social justice? Support your answer with suitable examples.

(GS Mains; Paper 2)
Write or upload your answer - SUBMIT HERE
04 May 2022 gs-mains-paper-2 GOVERNANCE
#Indian Polity and Governance-Constitution, Political System, Panchayati Raj, Public Policy, Rights Issues, etc.
#GS Mains Paper 2
Question : What do you mean by the principle of ‘Unity of Command’? Discuss the merits and demerits of the principle with regard to public administration citing some examples.

(GS Mains; Paper 2)
Write or upload your answer - SUBMIT HERE
15 Apr 2022 gs-mains-paper-2 GOVERNANCE
#Issues relating to development and management of Social Sector/Services relating to Health, Education, Human Resources
#GS Mains Paper 2
#Education Reform in India
Question : What could be the possible advantages of pursuing two degrees at a time as per the latest decision of UGC? Elaborate.

(GS MAINS; PAPER 2)
Write or upload your answer - SUBMIT HERE
14 Jan 2022 gs-mains-paper-2 GOVERNANCE
#Indian Polity and Governance-Constitution, Political System, Panchayati Raj, Public Policy, Rights Issues, etc.
#GS Prelims Paper 1
#GS Mains Paper 2
#Current events of national and international importance
Question : The government is working on a blueprint for "India @2047 - a vision plan for a ‘Future Ready India’ that befits the 100th year of Indian Independence."
What are the areas that have been identified as targets achievable within this decade? How does it want these targets to be achieved? 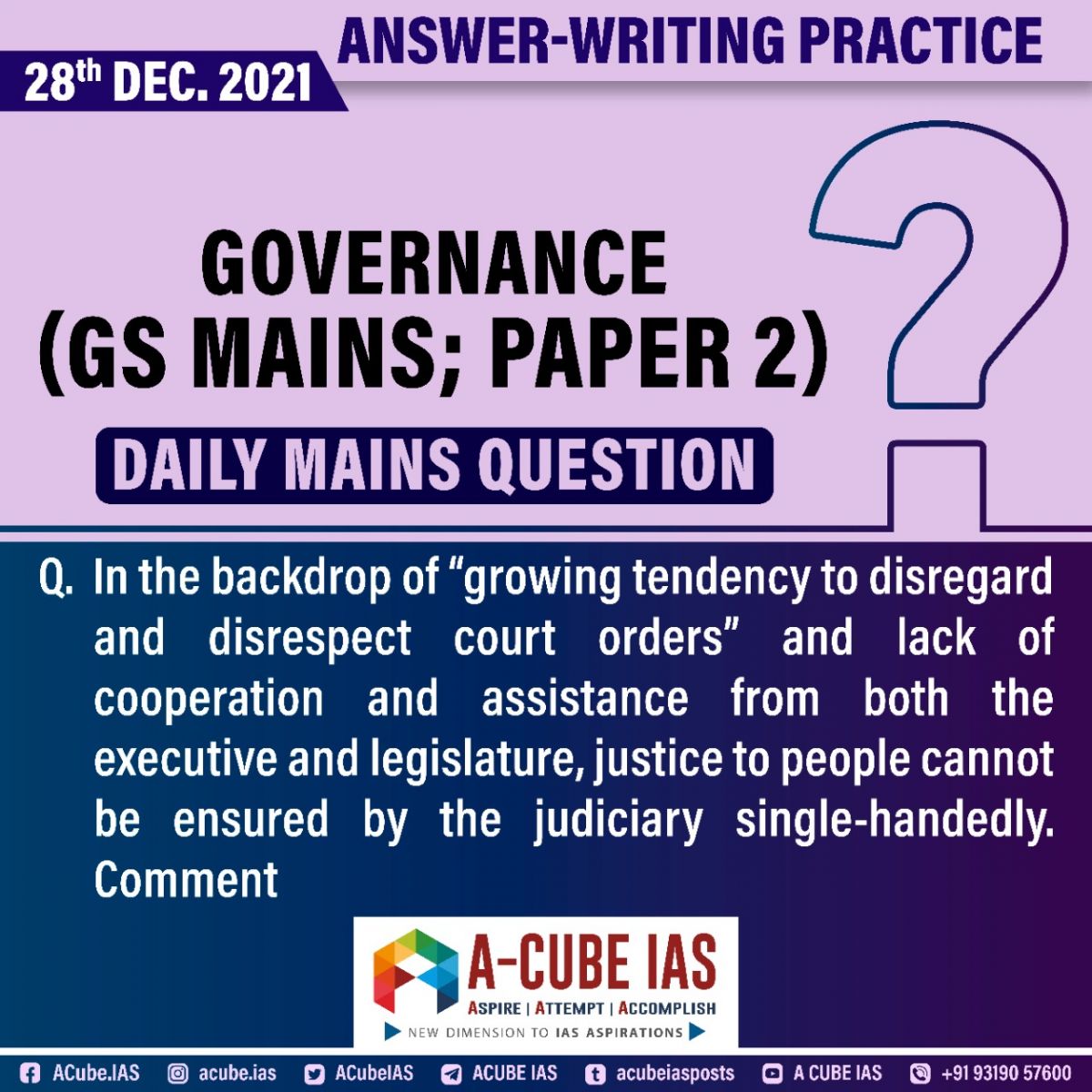 Write or upload your answer - SUBMIT HERE
25 Dec 2021 gs-mains-paper-2 GOVERNANCE
#Role of civil services in a democracy
#Indian Polity and Governance-Constitution, Political System, Panchayati Raj, Public Policy, Rights Issues, etc.
#GS Mains Paper 2
Question : Why India is facing a severe officer crunch in the Indian Administrative Service (IAS)? How does the shortage affect the governance both at the Centre and the states? Suggest the ways to overcome it.

(GS MAINS PAPER 2)
Write or upload your answer - SUBMIT HERE A-CUBE IAS Answer :
Ram Rajya envisages a society in which virtue, morality and justice are the core ideals around which day-to-day interactions between citizen and citizen and state and citizen occur. Since it is impossible to imagine such a perfect state of affairs, Ram Rajya, in the modern sense, is often thought of as an idealistic goal which governments should keep in mind and take inspiration from while implementing their governance agenda.
Though Mahatma Gandhi may have coined the term in its modern avatar, the concept of ‘Ram Rajya’ has been a part of Indian thinking for centuries. The term has both a practical and a philosophical-cum-utopian aspect.
Ram Rajya and its relevance:
Politically, Swaraj means the continuous effort to be independent of government control. It emphasizes on the maximum governance and minimum government.
Political independence was an essential precondition and exclusively the first step towards realization of Swaraj. It means a democratic set up must ensure the political democracy by providing the political rights to every section of the society.
Elements of Ram Rajya that can be incorporated in the present day governance:
As we can see, many good things are happening in India now, which go to promote many of the values of Ram rajya. Digitisation, demonetisation and GST are efforts to increase accountability, transparency and probity—the three key elements of good governance.
Such efforts of the government would ultimately help in promoting the values of honesty, accountability and collective good, leading to a better society.