05 Jul 2022 gs-mains-paper-3 INDIAN ECONOMY
#Indian Economy and issues relating to planning, mobilization, of resources, growth, development, and employment
#GS Mains Paper 3
#current affairs for upsc
#Agriculture
Question : Q. What is the rationale behind recent wheat and food products export bans? How does it affect inflation globally and within the domestic economy?


Decode the Question:
Submit your answer and get it checked by our mentors
Model Answers will be uploaded by the end of the day
Write or upload your answer - SUBMIT HERE A-CUBE IAS Answer :
The double whammy of the Russian war on Ukraine and changing climate poses a serious threat of food insecurity to several countries in Asia and Africa. The UN’s World Food Programme estimates that about 44 million people in 38 countries are already at ‘emergency levels of hunger’. Amidst rising global food prices, a number of countries have banned export of agricultural commodities.
As of May 29, 2022, 18 countries (excluding Russia and Ukraine) have imposed bans on exports of various commodities like wheat, pasta, corn, chicken and vegetable oils.
India has banned the export of wheat to check the potential rise in prices in the face of low procurement and there are reports suggesting that the government is mulling a ban on rice exports to tame inflation.
Rationale behind recent export bans:
Export ban and Inflation:
By doing so, the government's idea is to tame inflation in India. This export ban is a pre-emptive step and may prevent local wheat prices from rising substantially. However, in May, the consumer price index (CPI) inflation was 7.04 per cent (YoY).
The cereals group as a whole contributed only 6.6 per cent to this inflation. Within that, wheat, other than through PDS, contributed just 3.11 per cent and non-PDS rice contributed 1.59 per cent. So, by imposing a ban on wheat and rice exports, India can’t tame its inflation as more than 95 percent of CPI inflation is due to other items.
The Ukraine-Russia war has led to a slump in wheat production from a region known as the world’s bread basket. Russia and Ukraine together account for 25% of the world’s wheat exports.
It has led to a hike in prices of wheat and supply side glitches.
India is the world’s second largest wheat producer and one of its biggest consumers.
When the government decided to ban wheat exports in the face of climbing prices, there were many protests from the international community. In Asia, except for Australia and India, most other economies depend on imported wheat for domestic consumption and are at risk from higher wheat prices globally, even if they do not directly import from India.
Same is the case of Sugar. Similarly, Indonesia’s palm oil export ban has a significant impact on India’s economy.  Prices of edible oil hiked in India. It poses challenges to curtail inflation.
The recently concluded WTO ministerial meeting as well as the G-7 meet expressed concerns about food security in vulnerable nations. Abrupt export bans inflict high costs on poorer nations, and many millions fall below the poverty line as a result of such actions by a few.
If India wants to be a globally responsible player, it should avoid sudden and abrupt bans and, if need be, filter them through transparent export taxes to recover its large subsidies on power and fertilisers.
Source: Indian Express

(GS Mains; Paper 3)
Write or upload your answer - SUBMIT HERE
27 Mar 2022 gs-mains-paper-3 INDIAN ECONOMY
#GS Mains Paper 3
#Current events of national and international importance
#current affairs for upsc
#Agriculture
Question : In light of the Russia-Ukraine war, being the world’s second largest producer of wheat in short-term the entire world is banking on India for supply of wheat. Critically analyze the emerging situation.
To fill the huge gaps in global stocks is it a likely opportunity for Indian agri-exports?

Write or upload your answer - SUBMIT HERE
09 Feb 2022 gs-mains-paper-1 INDIAN HISTORY
#Modern Indian history from about the middle of the eighteenth century until the present- significant events, personalities, issues
#GS Mains Paper 1
#Agriculture
Question : “Commercialization of agriculture in colonial India led to a situation of growth without development.” Do you agree? Support your answer.

(GS MAINS; PAPER 3)
Write or upload your answer - SUBMIT HERE
09 Dec 2021 gs-mains-paper-3 GS MAINS PAPER 3
#GS Mains Paper 3
#Agriculture
Question : What are the types of agriculture markets in India? Which market is beneficial to the farmers and consumers and why? 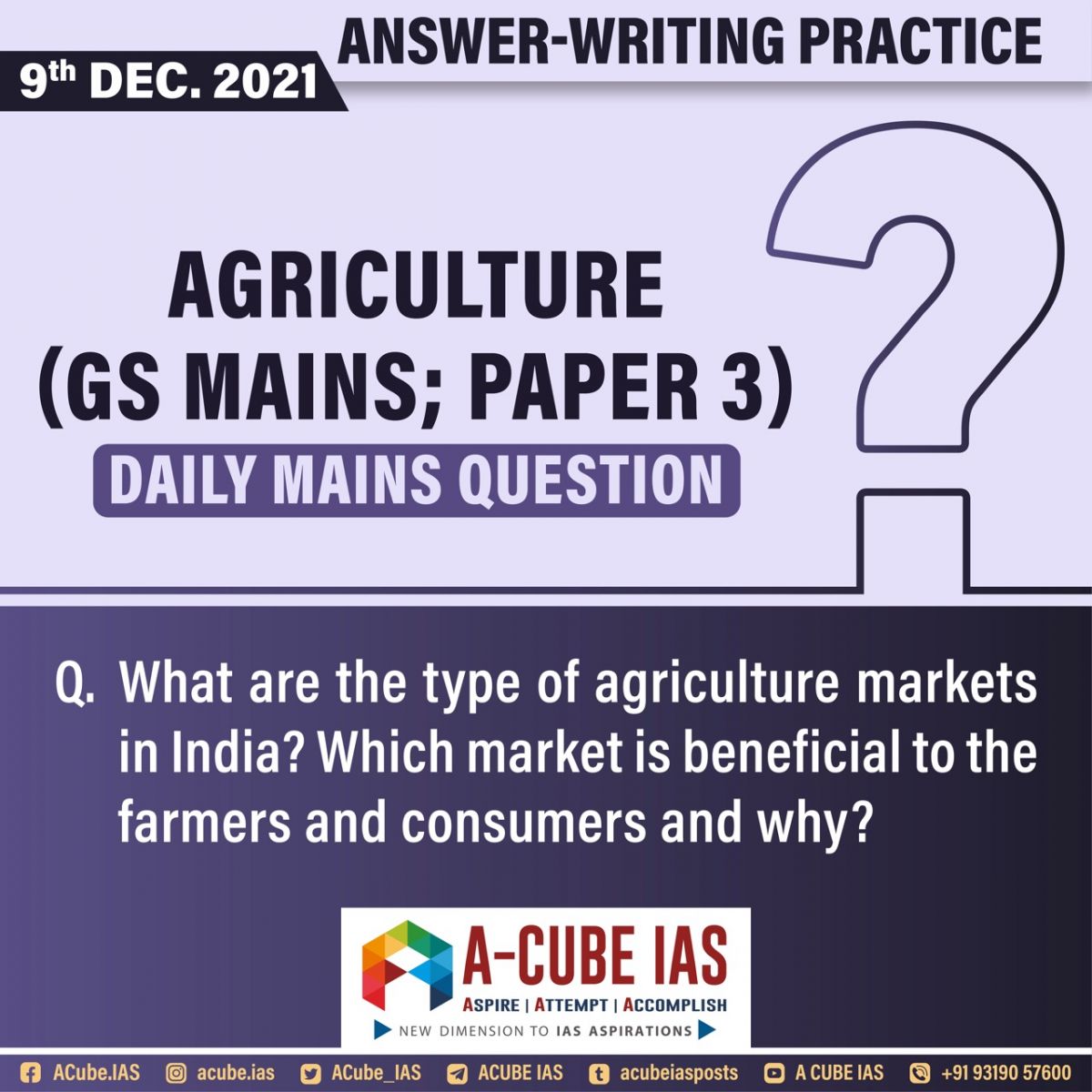