Submit your answer and get it checked by our mentors
Model Answers will be uploaded by the end of the day
Write or upload your answer - SUBMIT HERE A-CUBE IAS Answer :
Poverty entails more than the lack of income and productive resources to ensure sustainable livelihoods. Its manifestations include hunger and malnutrition, limited access to education and other basic services, social discrimination and exclusion, as well as the lack of participation in decision-making.
Since poverty has many facets, social scientists look at it through a variety of indicators. Usually, the indicators used relate to the levels of income and consumption. But now poverty is looked at through other social indicators like illiteracy level, lack of general resistance due to malnutrition, lack of access to healthcare, lack of job opportunities, lack of access to safe drinking water, sanitation etc.
Analysis of poverty based on social exclusion and vulnerability is now becoming very common.
Lower-income countries are too often disadvantaged due to a lack of institutions, decision-making autonomy, and financial resources, all of which hold back their effective implementation and effectiveness of data systems and governance frameworks.
These are no proxies for poverty since their linkages with nutritional indicators are considered tenuous and these can be explained in terms of intra-household distribution, poor dietary habits, improper water/sanitation facilities, etc.
The computation becomes far more challenging in the absence of data on consumption expenditure as is the case in India and several developing countries. Intending to provide inputs for policy making, researchers have evolved ingenious methods of estimating the data, using past datasets and those that have not been designed to get robust expenditure estimates.
So, the problem in poverty reduction is also due to the lack of its measurement data.
Some approaches to measure poverty in India:
India has a long history of studies on measurement of poverty. Dadabhai Naoroji’ in his book ‘Poverty and Un-British Rule in India,’ made the earliest estimate of poverty line at 1867-68 prices (Rs.16 to Rs.35 per capita per year) based on the cost of a subsistence diet for the emigrant coolies during their voyage living in a state of quietude.
The erstwhile Planning Commission was the nodal agency in India for estimation of poverty. Based on the methodology suggested by the Expert Groups/Committees set up by the Planning Commission from time to time, India has undertaken periodic assessments of the incidence of poverty since the 1960s.
A. Poverty Line Estimation
B. Use of Consumption Expenditure Surveys
There are two critical issues in the discourse on poverty in India. One relates to poverty measurement. Second relates to effective poverty elimination.
Source: Indian Express

01 May 2022 gs-mains-paper-1 SOCIAL ISSUES AND SOCIAL JUSTICE
#Role of women and women’s organization, population and associated issues, poverty and developmental issues, urbanization, their problems and their remedies
#INDIAN SOCIETY
#GS Mains Paper 1
Question : "Urbanisation is going to be the single biggest agent of growth in the next few decades in India." Comment.

(GS Mains; Paper 1)
Write or upload your answer - SUBMIT HERE
10 Apr 2022 gs-mains-paper-1 SOCIAL ISSUES AND SOCIAL JUSTICE
#Role of women and women’s organization, population and associated issues, poverty and developmental issues, urbanization, their problems and their remedies
#Issues relating to development and management of Social Sector/Services relating to Health, Education, Human Resources
#GS Mains Paper 1
#Employment and Social Development
Question : What do you mean by Urban Agglomeration. Define the criteria for a place to be designated as Urban Agglomeration as per the census-2021 of India. Has there been any change in the rules compared to census-2011? Elaborate.

(GS Mains; Paper 3)
Write or upload your answer - SUBMIT HERE
14 Mar 2022 gs-mains-paper-1 SOCIAL ISSUES AND SOCIAL JUSTICE
#Role of women and women’s organization, population and associated issues, poverty and developmental issues, urbanization, their problems and their remedies
#INDIAN SOCIETY
#GS Mains Paper 1
#current affairs for upsc
Question : At 103 per 100,000 live births, Maternal Mortality Ratio (MMR) of India is still far from 12 per 100,000 in high-income countries and less than 70 as per SDG. In this backdrop, how can maternal mortality be checked as it is the answer to women’s empowerment and development. Discuss.

(GS Mains; Paper-1)
Indian Society: Women Empowerment
Write or upload your answer - SUBMIT HERE
23 Jan 2022 gs-mains-paper-1 SOCIAL ISSUES AND SOCIAL JUSTICE
#Role of women and women’s organization, population and associated issues, poverty and developmental issues, urbanization, their problems and their remedies
#INDIAN SOCIETY
#GS Mains Paper 3
#GS Mains Paper 1
#General issues on Environmental ecology, Biodiversity and Climate Change
#Environment & Ecology
Question : “Seeing the trend in Migration to cities and impending climate change there is need for building sustainable cities.”
In the backdrop of above statement, what do you mean by sustainable cities? How these cities should be ready to face the impacts of climate changes? Elaborate with suitable example.

GS MAINS; PAPER 1 & 3
(Urbanisation, Migration, Climate Change)
Write or upload your answer - SUBMIT HERE
15 Jan 2022 gs-mains-paper-1 SOCIAL ISSUES AND SOCIAL JUSTICE
#Role of women and women’s organization, population and associated issues, poverty and developmental issues, urbanization, their problems and their remedies
#INDIAN SOCIETY
#GS Prelims Paper 1
#GS Mains Paper 1
Question : What must India do to turn its demographic opportunity into a dividend and ensure it is not squandered away? 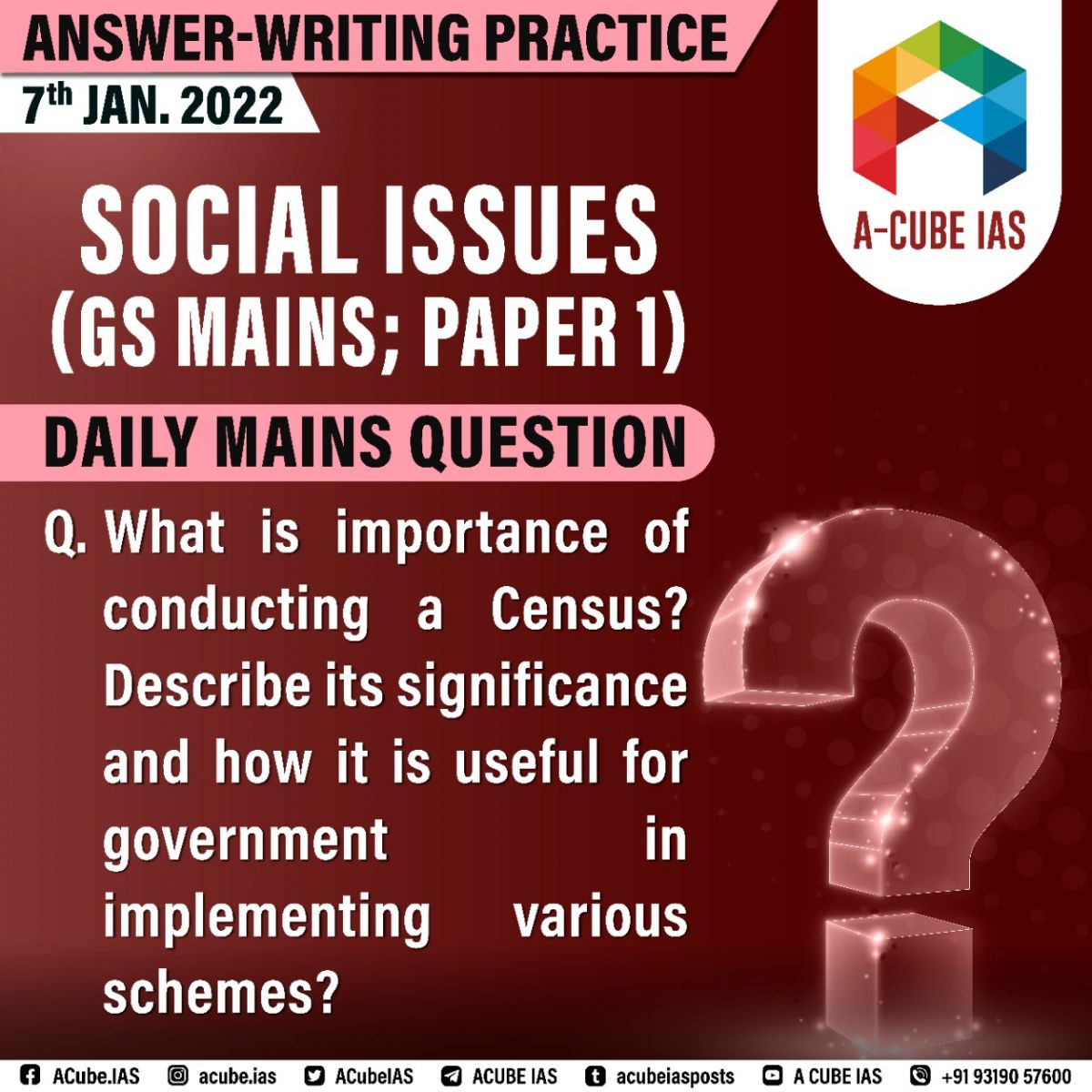 Write or upload your answer - SUBMIT HERE
04 Jan 2022 gs-mains-paper-3 INDIAN ECONOMY
#Welfare Schemes
#Role of women and women’s organization, population and associated issues, poverty and developmental issues, urbanization, their problems and their remedies
#GS Mains Paper 3
Question : What is the chief objective of Pradhan Mantri Matru Vandana Yojana (PMMVY)? It seems that the performance of the scheme has been deficient, necessitating urgent need to revisit the design and implementation of this scheme especially in the light of COVID pandemic, which has resulted in economic shocks. Elaborate.
Give your suggestions to improve maternal health and nutrition in a pragmatic manner. 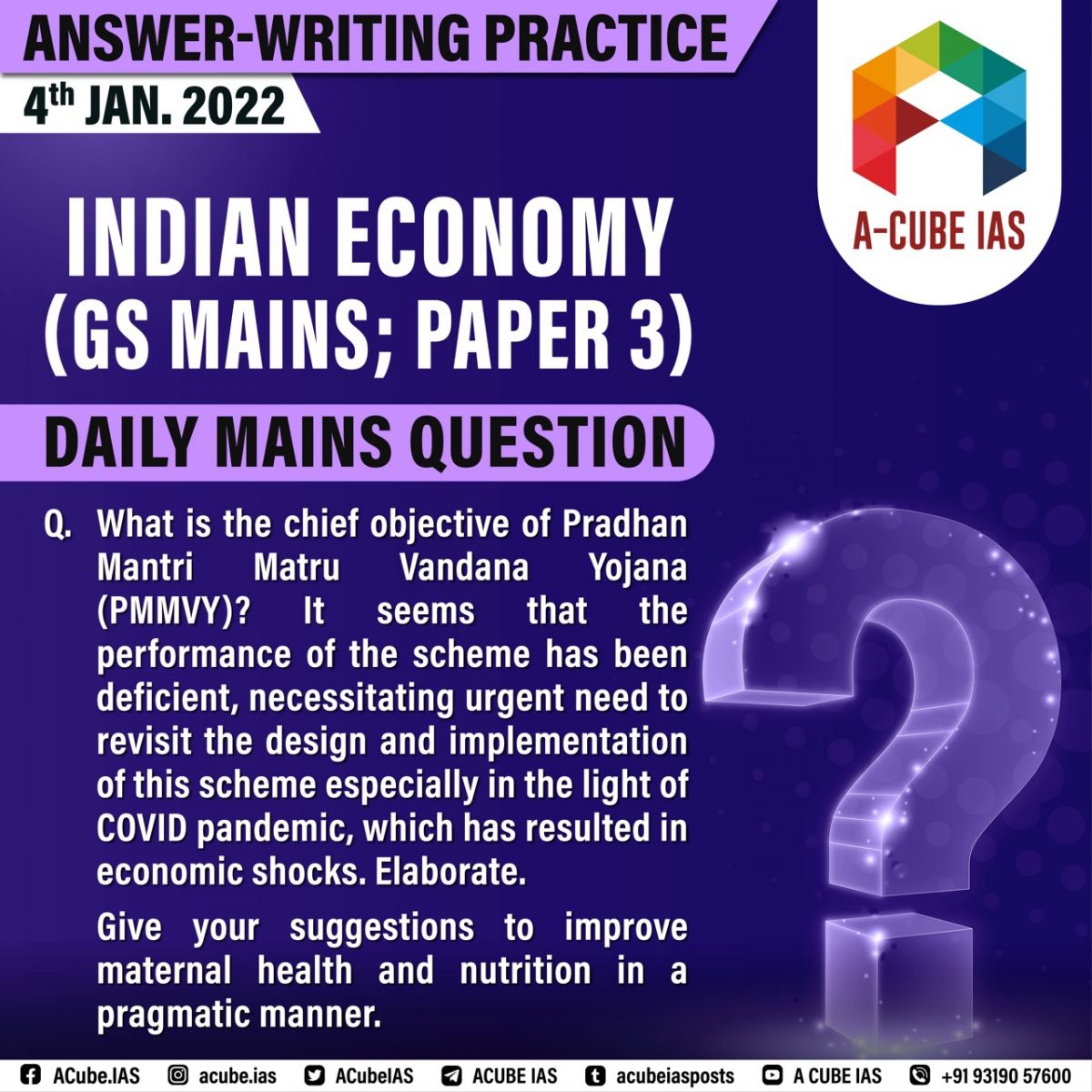