(GS Mains; Paper 1)
Indian Society
Write or upload your answer - SUBMIT HERE
23 Dec 2021 gs-mains-paper-2 SOCIAL ISSUES AND SOCIAL JUSTICE
#Salient features of Indian Society, Diversity of India
#Role of women and women’s organization, population and associated issues, poverty and developmental issues, urbanization, their problems and their remedies
#INDIAN SOCIETY
#GS Prelims Paper 1
#GS Mains Paper 1
Question : If GoI does proceed with the plan to increase the legal age for marriage for women to 21 years from 18 it will increase their voice and presence in both public and private spheres outside the single matrix of marriage and child-bearing as the proposed law is in the interest of gender equality. Do you agree? Elaborate.
What are the bottlenecks for its implementation and what are the counter opinions to increasing the marriageable age of women?

(GS MAINS; PAPER 1)
Write or upload your answer - SUBMIT HERE
03 Dec 2021 gs-mains-paper-1 SOCIAL ISSUES AND SOCIAL JUSTICE
#Salient features of Indian Society, Diversity of India
#Role of women and women’s organization, population and associated issues, poverty and developmental issues, urbanization, their problems and their remedies
#INDIAN SOCIETY
#GS Mains Paper 1
Question : The emigration of Indians has brought an old phrase ‘brain drain’ back into public conversation. But instead of bemoaning ‘Brain drain’ we should give way to ideas of ‘brain circulation’.
This will support economic development and demographic transition. Comment. 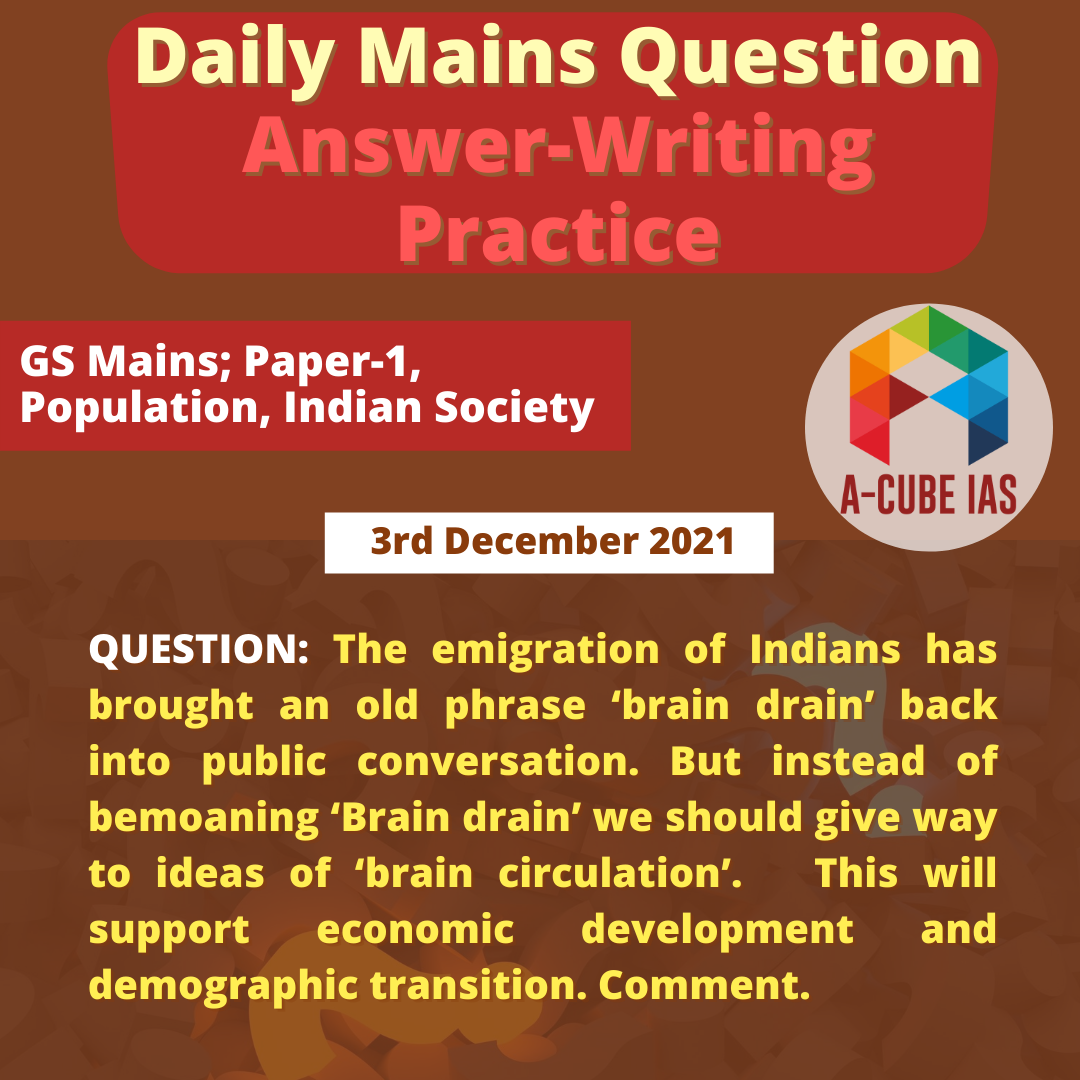 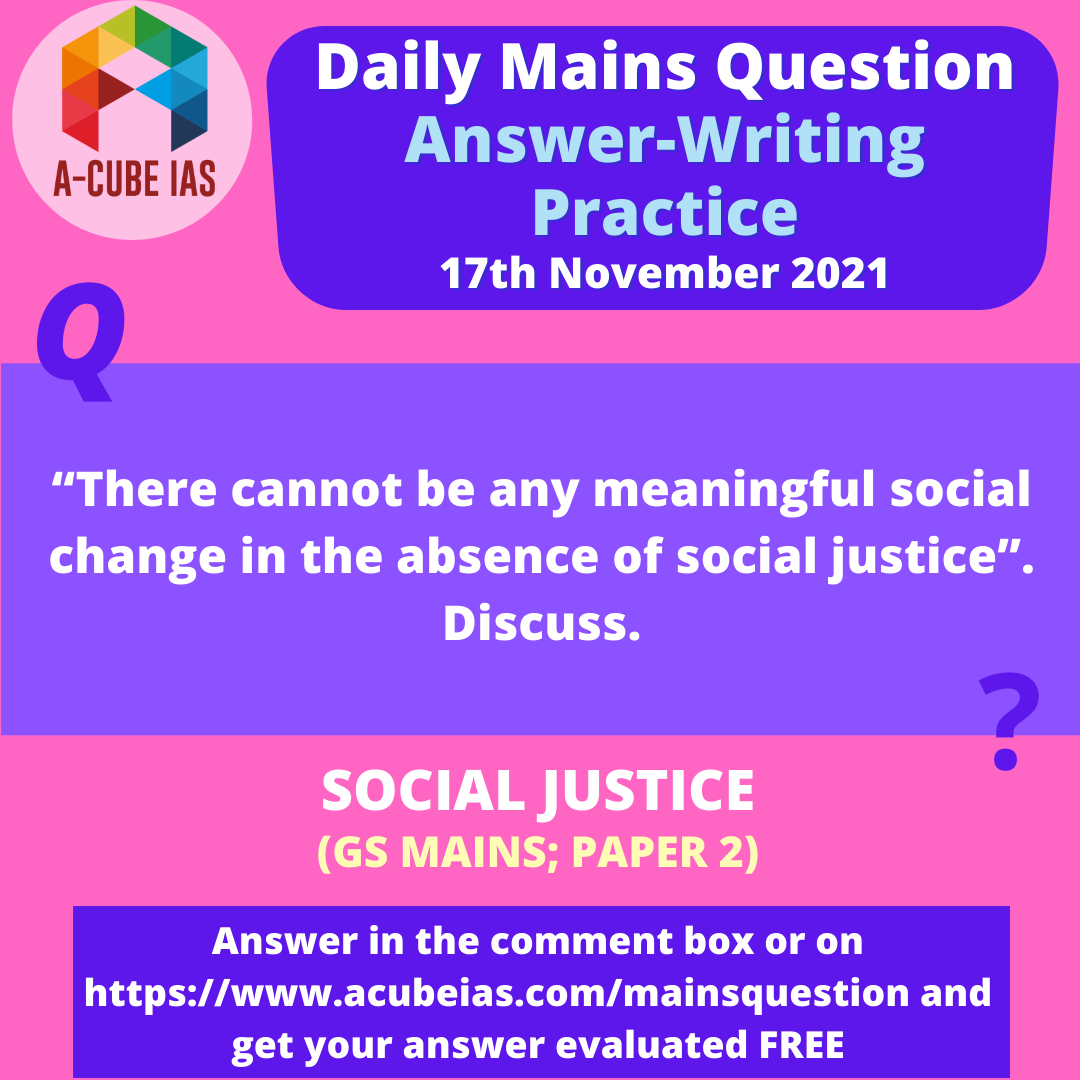 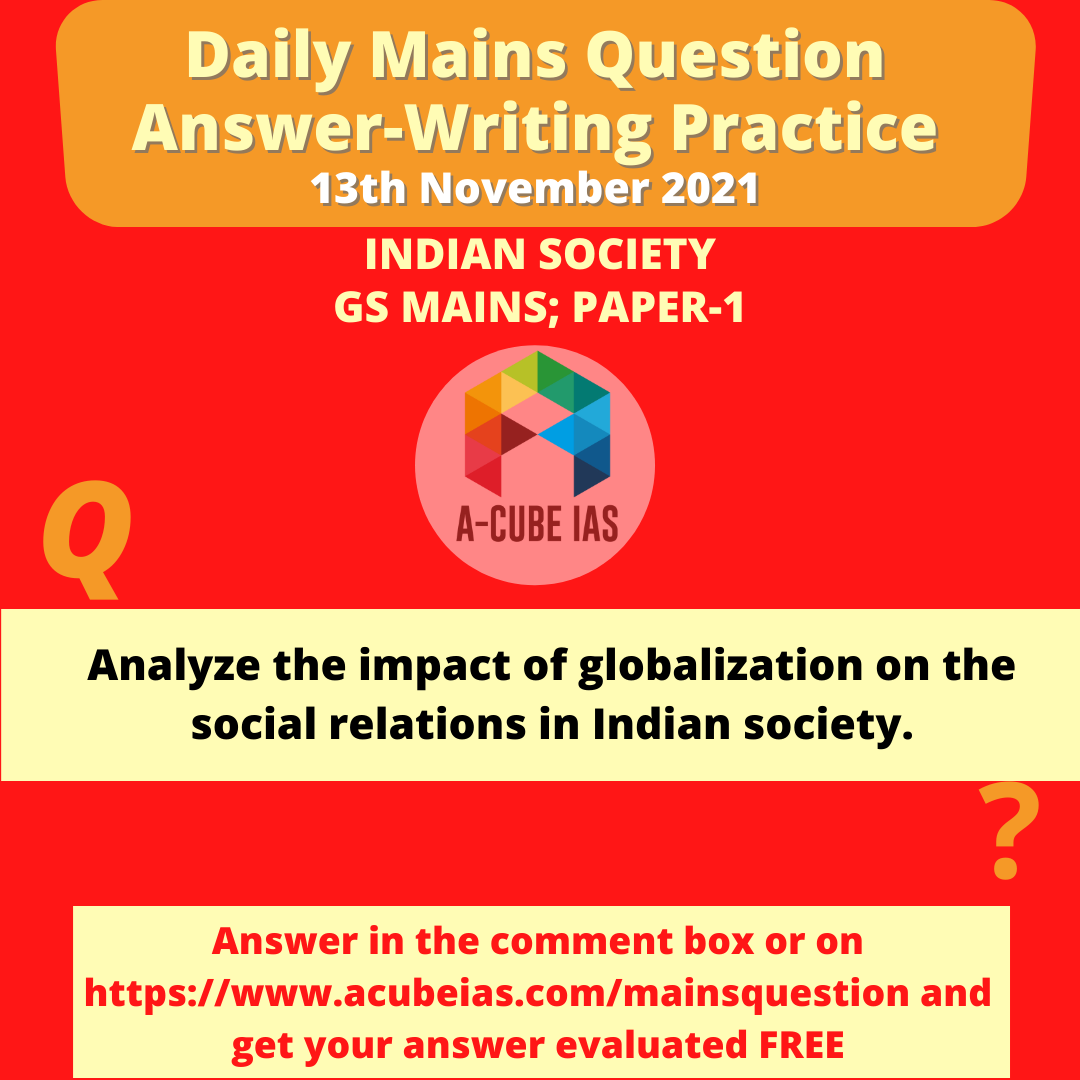 Write or upload your answer - SUBMIT HERE
16 Sep 2021 gs-mains-paper-1 SOCIAL ISSUES AND SOCIAL JUSTICE
#Salient features of Indian Society, Diversity of India
#INDIAN SOCIETY
#Effects of globalization on Indian society
Question : India is a country with a great culture where families are considered as preliminary schools rather than a group of blood relations because of togetherness that dwells in the generations that passed and those which are yet to arrive.
Despite having such a great culture intergenerational conflict in Indian society has risen. Enumerate the causes and suggest some ways to ameliorate the situation.

(Indian Society; GS Mains Paper 1)
Write or upload your answer - SUBMIT HERE A-CUBE IAS Answer :
As a social institution, family in Indian society has played an important role in the upbringing of children. Family give all of us the primary lesson about the diversity that exists in India and tolerance towards it. Family use to work as a starting point to interact with society and children learn their primary piece of information from the family itself. However, this doesn't prevent the occurrence of intergenerational conflict in Indian society.
Rise of inter-generational conflict within Indian society and reasons behind it
The rise of conflict has been observed in various walks of life and family is not an exception.
This has led to violence against elderly people who cannot support their living. Respect for cultural diversity among the younger generation has reduced due to narrow social interest.
Ways to ameliorate the situation
The gap within the family has to be reduced, and at the same time interaction between the elderly and younger generations has to be increased. Social alienation needs to reduce both inside the family and outside it. The elderly generation has to understand the socio-psychological status of the younger generation and vice versa.
Sensitivity towards ‘the needs and expectations of family members’ has to increase and one generation have to understand the needs of others.
Although the family is changing both its structure and role in modern times but their importance cannot be undermined. Their role as a primary stage for educating children is not going to be wither away, so there is a need for strengthening the working of the family to reduce the occurrence of intergenerational conflicts.